Travel in Mexico May Be Safer Than in the U.S.

May 11, 2013
John Jameson
Danger Statistics
3 Comments on Travel in Mexico May Be Safer Than in the U.S. 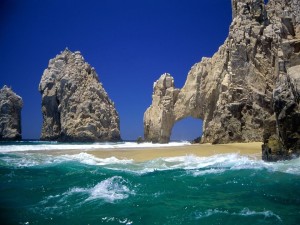 Last year, Lonely Planet’s U.S. Travel Editor Robert Reid discussed tourist safety in Mexico. Of most notable value, Reid pointed out that although tourism in Mexico could be made safer, tourism in the United States isn’t much better.

In Reid’s position, he’s oftentimes asked about whether it is safe to travel to Mexico. In an interview he gave to The Huffington Post featured in the article “Are Tourists Safer in Mexico or America,” Reid answered the question, “I have always said that, if you’re thoughtful about where you go, the answer is yes. But, after my most recent trip there, I’m answering the question with another question: Do you think it’s safe to go to Texas?”

Despite his positive (and mostly accurate) spin on the issues, Reid makes no qualms about the fact that Mexico can be unsafe, and violence in Mexico isn’t a topic to be taken lightly. The United Nations Office on Drugs & Crime Report announced a murder rate of 18 per 100,000, which is triple the rate of the United States at 4.8 per 100,000.

Surveys show that even with Mexico’s tourism revival, American citizens are much more reluctant to visit Mexico as opposed to Canadian or British citizens. The Huffington Post also reports that American tourism figures have shown a 3% decrease since 2010.

Most Americans who fear travel in Mexico have simply ignored the fact that they are much less likely to face violence in Mexico than in many U.S. cities. The report states that the murder rate in Orlando, Florida was 7.5 per 100,000 in 2010. This amount was higher than the murder rate of both Puerto Vallarta, Acapulco and Cancun, some of the most popular Mexican travel destinations. The article also points out that countries such as Belize, Jamaica and the Bahamas have triple the murder rate than that of any of the Mexican states.

Still, spring breakers have been forewarned. But why so much focus on Mexico? According to Robert Reid, the focus should instead be on the U.S. Reid claims that Texans are three times safer in Mexico than in Houston. In fact, it’s not just Texas, New Orleans has a higher crime rate than Mexico as well.

Is it OK to travel to Mexico? The answer is an overwhelming “yes,” according to many sources. The U.S. Department of State announced that “millions of U.S. citizens safely visit Mexico each year.” According to Reid, you can go to Mexico, just as you can go to Texas, or New Orleans, or Orlando, or the Bahamas. Just stay away from the unsafe areas where you do not want to spend your time. On your trip, be sure to stick to the busier resort areas, remain vigilant and don’t get involved in dangerous activities.

YES!!! It’s safe… we’ve lived in the Puerto Vallarta area for more than six years. We’ve driven back and forth to the border a half dozen times. We walk everywhere in town. Nada. I don’t mind that it’s quieter here now and with fewer Americans for sure, but the economy is feeling the pinch with lots of vacancies everywhere. But that’s more about landlords who won’t bring their rents down… argh.

Speaking of which, I invite to find out how you can save thousands of dollars if you’re planning to buy beach property in Mexico. http://beachpropertymexico.com

You are crazy to vacation in Mexico. The Los Zetas along with other cartels would love to kidnap your family collect the $25 – 100k and execute your child or spouse. Of all the places in the world, why take the risk in Mexico? I use to live in San Diego for many years and would cross the boarder to eat lunch or go to dinner. No problems until about 2005/06. The Mexican people are wonderful, but they are controlled by fear and I do not blame them. The drug cartels are evil and will kill toddlers to keep the population in a state of fear. Why play roulette with your family when there are so many other safer places to visit?

Thank you for you perspective, but I think you need to stop watching prime time news and learn the truth. literally millions of people travel safely to Mexico every year. It is true that you shouldn’t travel to areas with travel warnings, but those areas are not the tourist areas.