Should I Worry About the Zika Virus in Mexico?

August 5, 2016
John Jameson
Health Safety in Mexico
1 Comment on Should I Worry About the Zika Virus in Mexico?

As of late, a topic of concern for many travelers has been the Zika virus in Mexico. The virus, spread by mosquitoes, has been reported in Mexico by the Center for Disease Control and Prevention (CDC) in the form of local transmission. However, even with its presence, the majority of people have no need to worry. Symptomatically, the virus tends to be extremely mild, but more often than not, the symptoms never even occur. Ultimately, it is unnecessary for the average person to put off travel because of it.

Risk of Zika in Mexico

Generally speaking, the risk of Zika is fairly low. In the first five months of 2016 there have been approximately 300 cases reported in Mexico, compared to Brazil, who reported over 140,000 cases and the Dominican Republic, reporting 2900.

Granted, the risk is likely to increase later this year during the wet seasons of September and October. While the risk of Zika above 6500 feet of elevation is essentially zero, most popular tourist areas are below that elevation.  With that said, no areas of serious risk have been reported for the Zika Virus in Mexico anywhere in the country to date.

When we were last at the Vidanta resorts in Cabo and in Nuevo Vallarta (Grand Mayan and Grand Luxxe)  they were diligently spraying for mosquitoes.  We saw one mosquito the whole time we were there.  Interestingly, there was a Zika outbreak in French Polynesia when we were staying on the island of Moorea two years ago.  The French hotel manager had the symptoms of Zika, however this was before anyone in the Americas had ever heard of the virus.

For the average person, Zika presents itself as a fever, rash, joint pain, and redness in the eyes. Most individuals who contract Zika will be unaware of it, because only 1 in 5 people display symptoms. The general side effects of Zika are most commonly very mild, and if presented, are easily treatable at home.  Very rarely does the virus cause any severe complications.

For a pregnant woman, Zika poses the greatest risk. An expectant mother can pass the disease on to her unborn child, leading to the potential of a miscarriage. A fetus infected with Zika is more likely to be born with serious birth defects, including microcephaly, a severe defect of the brain that can be fatal.

The Zika virus, as aforementioned, is most commonly spread through mosquitoes. When bitten by an infected mosquito, the individual has the possibility to contract the disease. If symptoms are presented, they will usually last from several days to a week.  The mosquito that spreads Zika is the Aedes Aegypti mosquito, the same breed that also spreads Dengue fever.  This is very different from the malaria carrying Anopheles mosquito.  While the Aedes 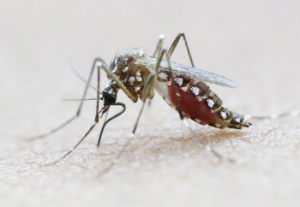 Aegypti is common in urban areas and bites during the day, it is most commonly found in poorer areas with old tires and other water retaining items. In contrast, the malaria mosquito Anopheles feeds late in the evening and throughout the night.

Zika virus also has the potential to be transmitted sexually by men. Any form of sexual contact has the possibility of passing the disease from a male to his partner. Because of this, the CDC recommends couples to have protected sex for up to 8 weeks after exposure. If a man has displayed symptoms of Zika after exposure, the CDC recommends protection for up to 6 months .

In summary, although the Zika Virus in Mexico is still very uncommon and not to be worried about, pregnant women may want to delay their trip until after the baby arrives.