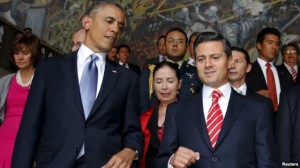 President Obama gave talks regarding Mexico in early May. What was telling to some was that he didn’t focus his speech on the drug wars in Mexico. To many, it painted a picture that the president finds Mexico’s national economy and U.S. relations to be much more pressing topics. “New York Times” columnist Randal C. Archibold reported on these talks, which centered around his views on several relevant topics, mostly regarding Mexico’s economy and relations with the U.S.

“We agree that the relationship between our countries should be defined not by the threats that we encounter, but by the prosperity and the chance that we can create collectively.” – President Obama

After suggesting that security associations between the U.S. and Mexico could be better, Mr. Obama hardly mentioned the problem in his address, a sign that the issue has provided American officials with lots of headaches. Archibold reported that a surge of investment in production, technology and other sectors has helped raise the Mexican middle class. Additionally, Mexico’s consumer spending has increased within the national market. In fact, the country’s consumer spending doubled that of the U.S. over the past two years.

Still, economic and trade discussions have caused disagreements. Mexican government officials, in private discussions with President Obama, honed in on the fact that on the Mexican/U.S. border, long, expensive delays for commercial trucks and workers make it much more difficult to get into the U.S. Obama’s concerns show a willingness to ease Mexican/U.S. tension regarding border issues. Also according to Archibold, Mexican officials and senior government proposed public-private partnerships in order to fund redevelopment in Mexico.

“There was definitely recognition on both sides that it is something that people must focus on,” said one senior United States official who participated in the meetings. “It brings together the dilemma of border safety, border protection, immigration and commerce.”

Antonio Garza, a former American ambassador, said American and Mexican authorities have long spoken about building customs stations in Mexican territory, among other short-term fixes that will speed business. “The conversation now is how do you choose the amount of dedication to security and employ it to making the border business more efficient?” he said.

American authorities said they expect such problems to be an issue in the new economic conversation that’ll begin this fall and comprise cabinet members, Vice President Biden and senior Mexican economic authorities.