Puerto Peñasco safety and crime rates are often called into question but is their any merit to the questioning? Let’s take a look and find out!

Once an unassuming fishing village…

Puerto Peñasco is a fast transforming fishing village in the desert state of Sonora, connecting the Baja California Peninsula and the rest of Mexico, about 62 miles south of the border of Arizona. Puerto Penasco has quickly made a name for itself among travelers. The city offers a different vibe than Cabo and Mexico City, making it perfect for those looking for something different. Though for all it has to offer, is Puerto Peñasco safe?

To answer that question, yes it’s safe.  Despite stories about rising rates of violence, a majority of Mexico is rather safe and comparable to any other place in the world. Though just like anywhere in the world, it is not free from crime, so a bit of common sense is still needed. Though that said, to consider Mexico dangerous and crime-ridden would be a mistake. And one that would prevent you from seeing the beauty right outside your border.

The proximity to mainland US has made Puerto Peñasco a road tripper’s ideal getaway.

While a convenient trek just across the border, caution should be used when undertaking this journey. The U.S. State Department has issued a travel warning for the state of Sonora, citing an uptick in assaults against Americans since 2012. Cartel activity, carjacking, and highway robbery are the situations to be aware of. However, since this safety warning was announced, the Mexican government has provided more funding and police officers to these areas.

However, travelers should follow safety tips from the State Department to avoid any such circumstances. Some of the major advice is to use the Sonoyta border crossing at Lukesville, Ariz. to spend the shortest time on the road in Mexico en route to Puerto Peñasco, and driving only when the sun is up. While in the city, be a low key traveler, not flaunting wealth and just be aware of your surroundings; catch cabs only from designated taxi stands. 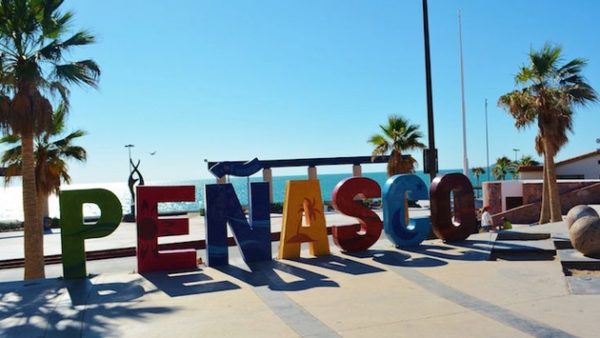 Puerto Peñasco was home to very few permanent residence until 1930, mainly due to its remote location. But since then it has bloomed into a popular beach, and fishing, locale for people from California, Arizona, and Nevada, who call it Rocky Point.

Another one of its many nicknames is “Arizona’s Beach” because of the proximity of Tucson, Phoenix, and Yuma. To promote tourism, Puerto Peñasco was declared part of the border “free zone,” meaning Americans can drive there without obtaining a visa. It has become a major tourist center in a short amount of time, with numerous hotels and camping/RV sites. An abundance of beautiful beaches, paired with an impressive display of marine life has prompted beachside homes, plans for condominiums, malls, marinas and golf courses.  The Mayan Palace resort has just added entire new upper-level units called the  Grand Mayan Puerto Penasco ,  Both are east of town about 20 minutes.

The most important tip…

In the end, the most important safety tip is to stay away from illegal activities yourself. Unfortunately, bad things can happen anywhere. But using common sense and some specific safety tips should ensure a pleasant vacation and get you home safely. Keep these mind when traveling as well:

If you still want to read up on a few more tips check out our piece for staying safe in Mexico.

Or if you’re ready to see Mexico for yourself, pack your bags, find a hotel, and discover everything Mexico has to offer!

Just be sure to remember our Puerto Peñasco safety tips!

I have traveled in Mexico for 43 years, mostly by myself, covering some 40K miles all over the country, including some heavy duty Maya Culture digs I was involved in during my University studies. I roughed it through all kinds of terrains in a VW bug. I was naive, young, romantic and full of love for this country and maybe, just for this reason, I am still alive and have only one bad experience I would have liked to be without. I accumulated a fair knowledge of the real Mexican people, the language and traditions, all of which I find rejuvenating, colorful and mostly kind.
I rented a house in a secured mostly American community in Puerto Penasco by the beach in 2012-2013. I get along well with Mexican people and always seem to be lucky in most of my transactions in Mexico. I am personable like Mexican people generally are and that is probably the reason.
However, there are visible problems.
I love animals. Seeing sick, undernourished, injured dogs in the streets was stressful. I actually got to the point where I couldn’t stand it anymore and had to leave. The accumulation of trash, mostly beer cans and liquor bottles are an insult to the otherwise beautiful beaches in town. The areas in town populated by the poor are heart breaking. One just wants to help replacing cardboard box living in all kinds of weather. Begging men and women will claw onto your car window to receive money. My own conscience made living expenses high for me, helping those who had so much less than myself, who lives on a tight retirement budget.
One day while out with my neighbor to buy plumbing supplies, my car was stopped by an entire truck full of Federales who carried guns across their chest. One came to my window and told me that I had just gone through a stop sign. My independent spirit wanted to argue that there was no stop sign and that I stopped at every corner because of animals and people automatically. I started out, but my neighbor bumped me to be silent.
I had to lie which is difficult for me. “O senior, lo siento mucho, no vi el cartel”, I heard myself say and he let me go. I argued with my neighbor and insisted to drive around the block to see the infamous stop sign. He told me that there used to be a stop sign which was knocked down in an accident but the federales still fined people for driving through without stopping.
Another time I was traveling the highway from Puerto Penasco to Ajo. I was passed by a black truck with completely blackened windows who just about caused me to hit him. I swore at the driver, extending a middle finger which I only do driving and realized that it mostly likely was a cartel member. I looked at my passenger, my little dog and apologized for getting us in potential trouble.
There are more, similar stories undermining safety in Mexico. I am 70 now, less naive and wiser.
I would return to driving in Mexico, but only in the company of a very tall, robust young male, the chances of which I doubt will materialize.
I think flying to resort type areas is probably still very safe and also affordable. BE CAREFUL.